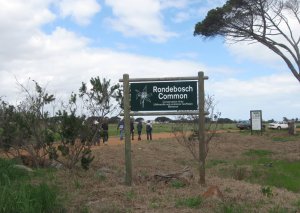 The Friends of Rondebosch Common has elected a new chairperson to head the organisation.

Rob Jennings from Rosebank took up the position to assist the Friends after their former chairperson Tim Jobson stepped down after 18 years.

Jennings says he has always been part of the Friends committee, but never held a portfolio position.

“There are a number of people on the committee who have a lot of expertise in the field of conservation and heritage and I want them to be free to do their job,” he says.

As a land surveyor, Jennings says he does not have an environmental or conservation background so he plans to hold the position until someone who has the ability to deal with environmental and conservation skills take over. “The common is a tremendous asset to the area and there are a number of people who are well placed to help with its management,” he says.

However, in his role as chairperson he has various issues he needs to discuss with the ward councillor.

He says things have changed over the years and one of them is the launch of a pathway along the common which has brought a lot of activity to the area.

“We are monitoring this new development very closely and I am sure it is going to require a lot of work to keep the common in the state that it is now. But we will deal with it step by step,” he says.

However, Jennings says, the pathway has brought people in the community closer together. “People get to meet one another and socialise while walking their dogs, riding their bicycles or pushing their children in a pram. This is all great to see and is exactly what we hoped the pathway would create,” he says.

He welcomes the public to join the Friends group and to support in whichever way they think will be to the benefit of the common and community. “We need the support of the public to in order to continue what we are doing.”.